A number of new germline alleles were found in the work for this paper:

Ability to develop broadly neutralizing HIV-1 antibodies is not restricted by the germline Ig gene repertoire.

The human Ig repertoire is vast, producing billions of unique Abs from a limited number of germline Ig genes. The IgH V region (IGHV) is central to Ag binding and consists of 48 functional genes. In this study, we analyzed whether HIV-1-infected individuals who develop broadly neutralizing Abs show a distinctive germline IGHV profile. Using both 454 and Illumina technologies, we sequenced the IGHV repertoire of 28 HIV-infected South African women from the Centre for the AIDS Programme of Research in South Africa (CAPRISA) 002 and 004 cohorts, 13 of whom developed broadly neutralizing Abs. Of the 259 IGHV alleles identified in this study, approximately half were not found in the International Immunogenetics Database (IMGT). This included 85 entirely novel alleles and 38 alleles that matched rearranged sequences in non-IMGT databases. Analysis of the rearranged H chain V region genes of mAbs isolated from seven of these women, as well as previously isolated broadly neutralizing Abs from other donors, provided evidence that at least eight novel or non-IMGT alleles contributed to functional Abs. Importantly, we found that, despite a wide range in the number of IGHV alleles in each individual, including alleles used by known broadly neutralizing Abs, there were no significant differences in germline IGHV repertoires between individuals who do and do not develop broadly neutralizing Abs. This study reports novel IGHV repertoires and highlights the importance of a fully comprehensive Ig database for germline gene usage prediction. Furthermore, these data suggest a lack of genetic bias in broadly neutralizing Ab development in HIV-1 infection, with positive implications for HIV vaccine design. 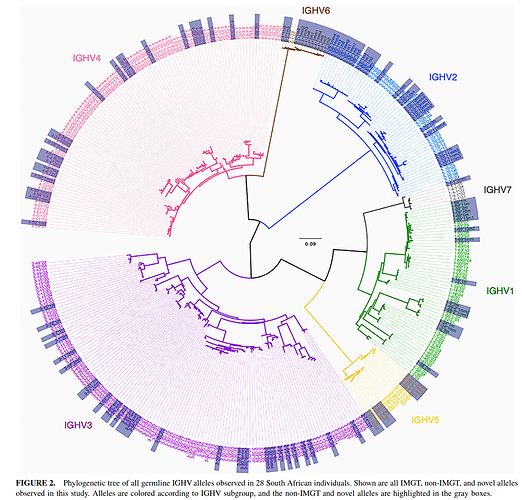